Are endings of NBA games boring? 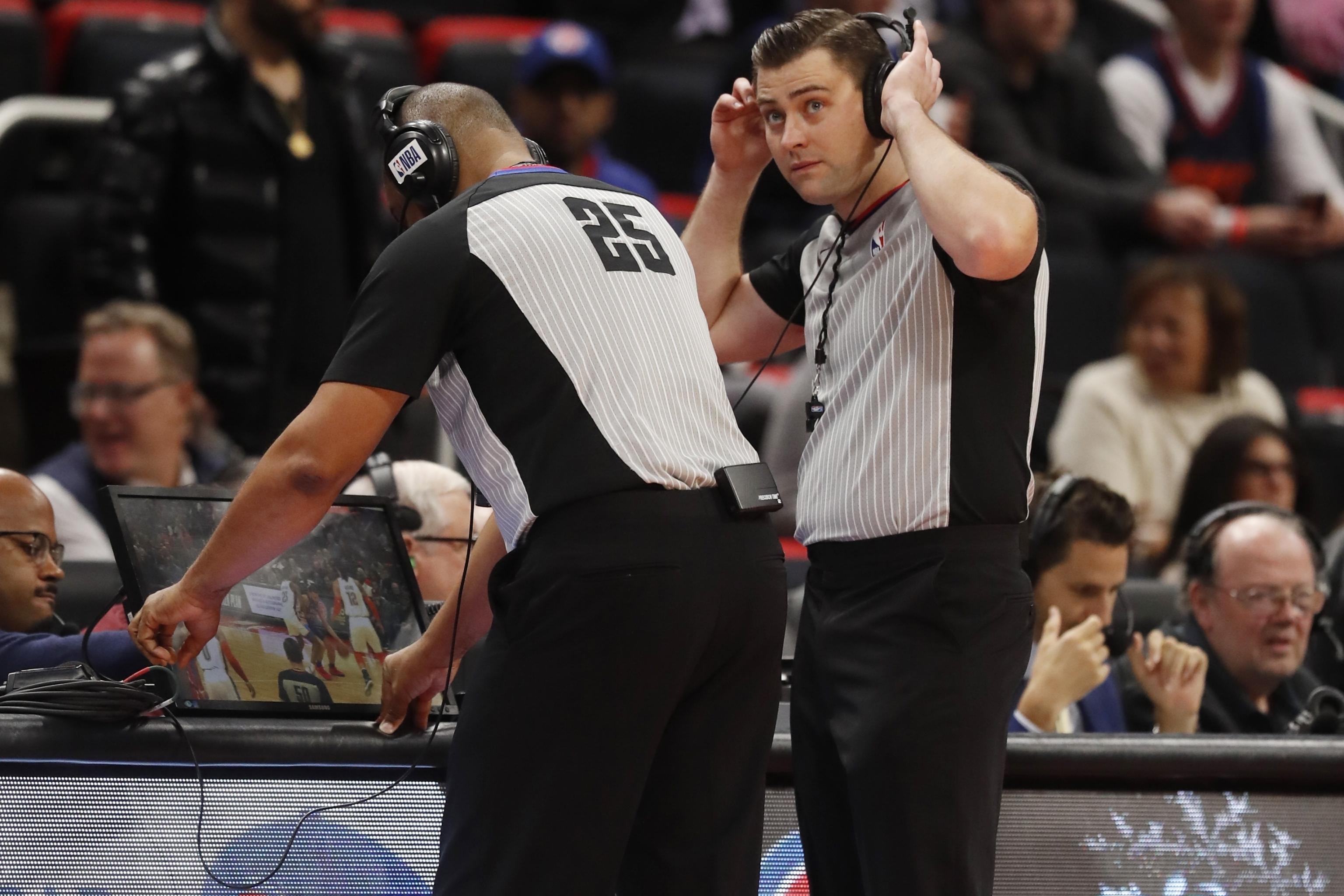 In a time where NBA ratings are decreasing significantly and arenas have been empty for almost a year now, the excitement during the last couple of minutes is of huge importance. But is the experience of watching live games ruined by constant interruptions? In this post, I look at how those interruptions impact the length of always crucial last minute of the game.

When you watch football (or soccer, if you’re American) and the match is nearing the end of the injury time, very rarely will the match be extended by more than the previously shown number of extra minutes (if it does get extended, these are exceptional cases of additional injury or goal scored). In other sports that are determined by time intervals (handball, water polo, hockey) such situations are even rarer.

Basketball is one of the few sports in which you can “steal” time and win tactically, even though you were in a not-so-good situation a minute or two before the end of the game. That is why basketball is a wonderful sport. Or is it?

NBA games can extend that last minute of the game for a huge chunk of time, and they can often distract a casual fan from watching games in the future. Maybe that’s why NBA ratings are lower than ever, because people nowadays have shorter and shorter attention span, which may be partly due to social networks that constantly offer new content with just one click, swipe, or something else. But I digress, please don’t wander off. Pls.

Let’s get back to basketball and look at possible reasons which extend NBA games. In the 2002-03 season, the Instant Replay option was introduced that allows referees to check the previous play. A few seasons ago, the NBA introduced the option for coaches to challenge previous plays that referees didn’t think were necessary to review. And with all that, teams still have a huge number of timeouts (7 per game?) to use. These would be some potential reasons for extending the ending of the games, but first, let’s look at how long do endings of the matches actually last?

The length of the NBA games’ endings

The data I will observe in this analysis are regular season matches starting from the 2000-01 season all the way up to the current season. Each NBA match is accompanied by a play-by-play report that records the time (in-match and “world” time) of each action. Using this data, I will extract the duration of the last minute of each match.

To begin with, matches shall be divided into the clutch and non-clutch games. I will split them in such a way because I have the impression that games that are “clutch” are more often delayed than these others. I defined clutch matches as those in which the score margin that last minute of the match was 5 points or less, while non-clutch are all the others. The distribution of these matches leans slightly towards non-clutch matches, but this is not a problem because there is a very large number of matches (at the time of writing, there are already 690 games this season, and the ratio of non-clutch:clutch is approximately 60:40, we can assume that previous distributions will be okay as well). 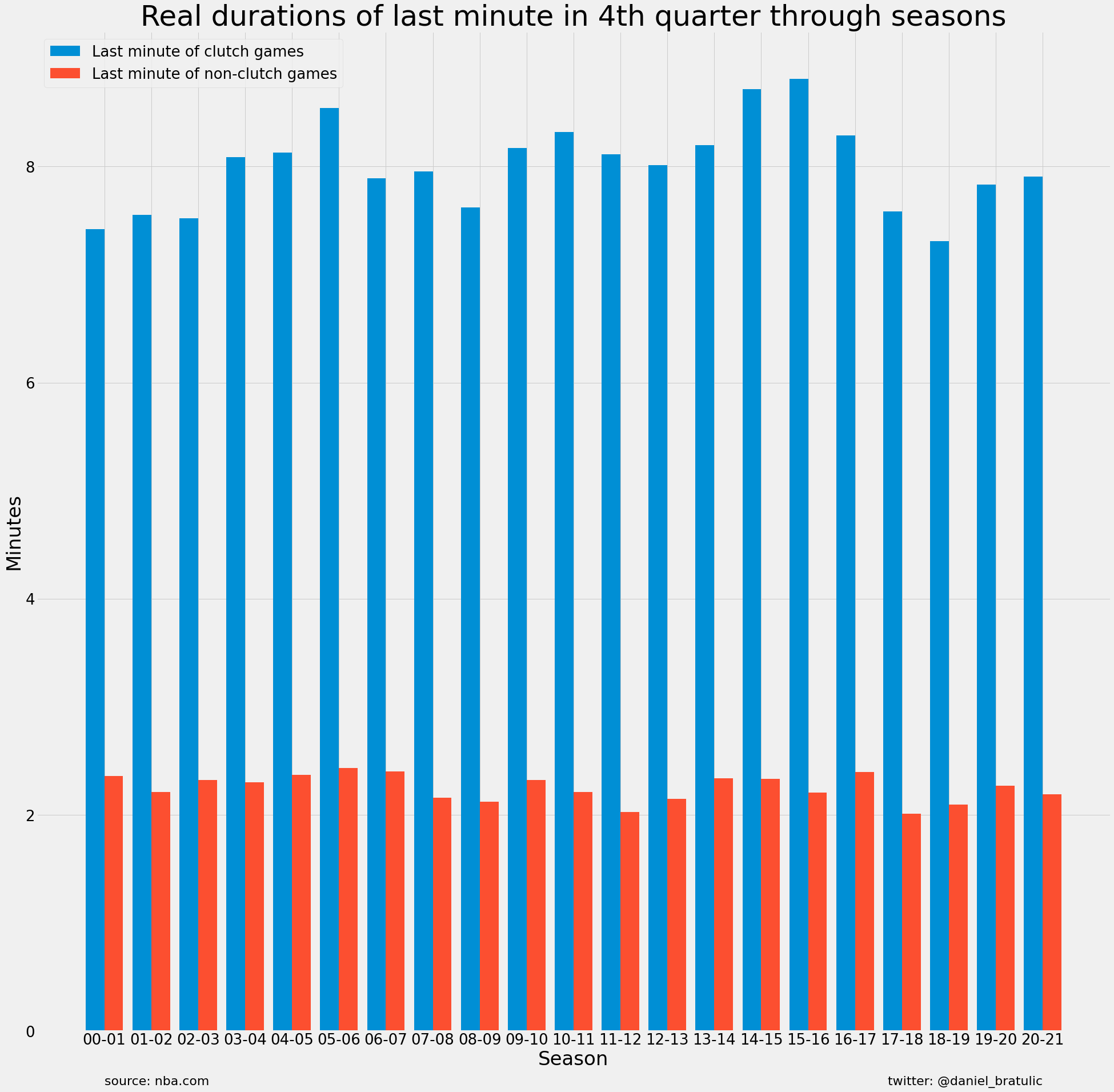 And as I mentioned in the introduction, such situations are sometimes exciting and tense, when players of one team defend the advantage with free throws, and the opposing players try to make up the difference with quick shots followed by full-court press or fouling opponents, sending them back to the free throw line and hope that they miss. And that is the pattern in most close basketball games.

But what exactly influences such a long ending in NBA games?

Most of us probably blame this feature for such a significant extension of game lengths because if you look at the previous graph again you will see that just around 2002-03 the last minutes of the match start lasting more than before.

But in reality, we can’t blame instant replay for that problem. On average, these challenges last about half a minute, with a few (but literally a few) exceptions lasting over 5 minutes.

Also, there is no difference even if we single out the instant replays at the end of the game and in the rest of the game because even then the average time spent on replays is around half a minute. So this option does not affect the increase of last minute’s length.

The situation is already different here. In the following graph, you can see the division of timeouts by quarters (including overtime) and minutes. 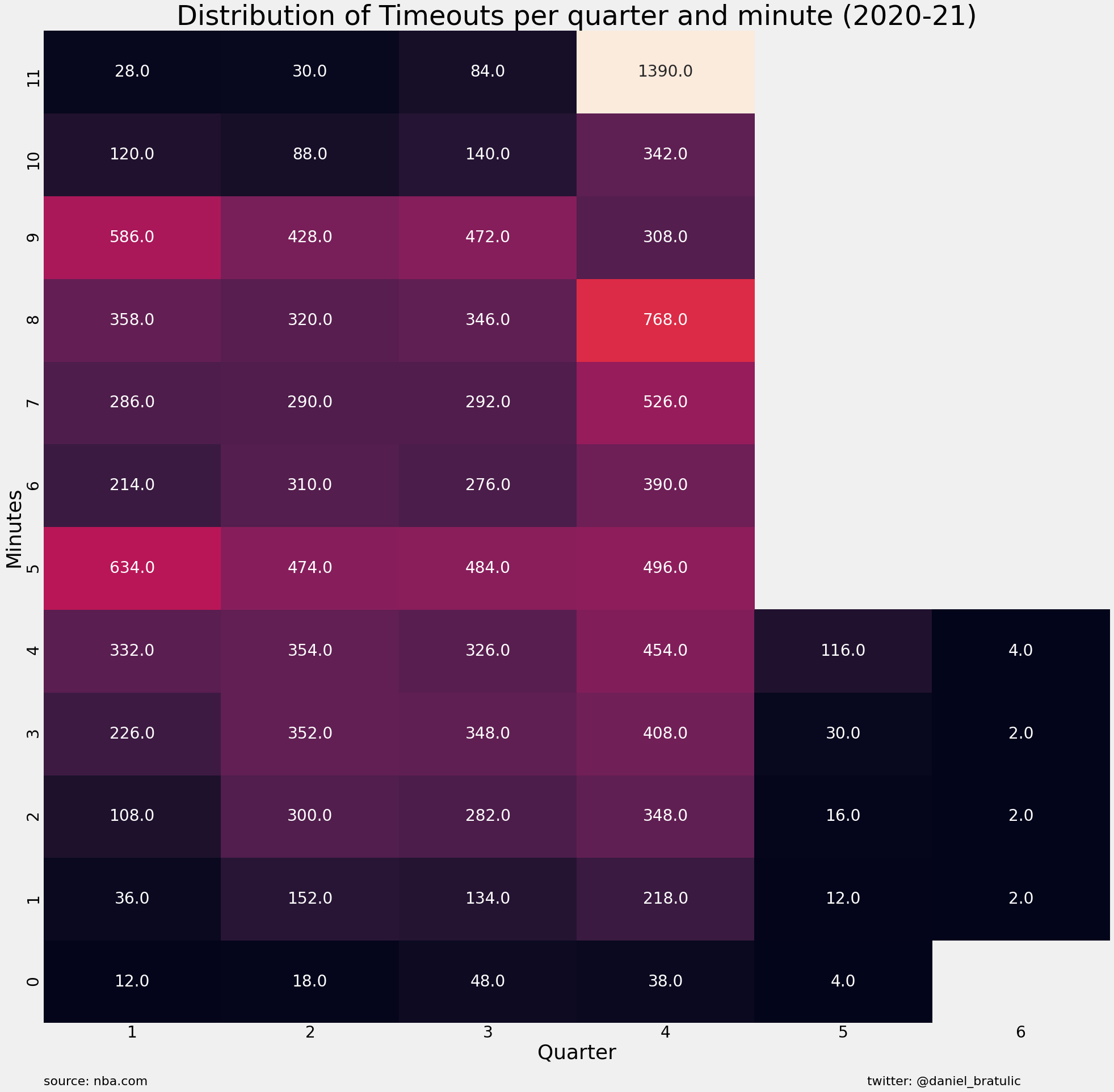 In the current season, 1390 timeouts were called in the 4th quarter when there was a minute or less left until the end of the game.

The length of these timeouts is not that long on average, as those timeouts often happen to be 20-second timeouts, but on average they still last about 1 minute and 10 seconds. So if you multiply that by 3.5 timeouts per game, you get an extra 4 minutes on average per game.

And such large numbers are with the NBA League’s efforts to reduce the number of timeouts and their duration (in the early 2000s there was a different ratio of full timeouts and 20-sec timeouts). 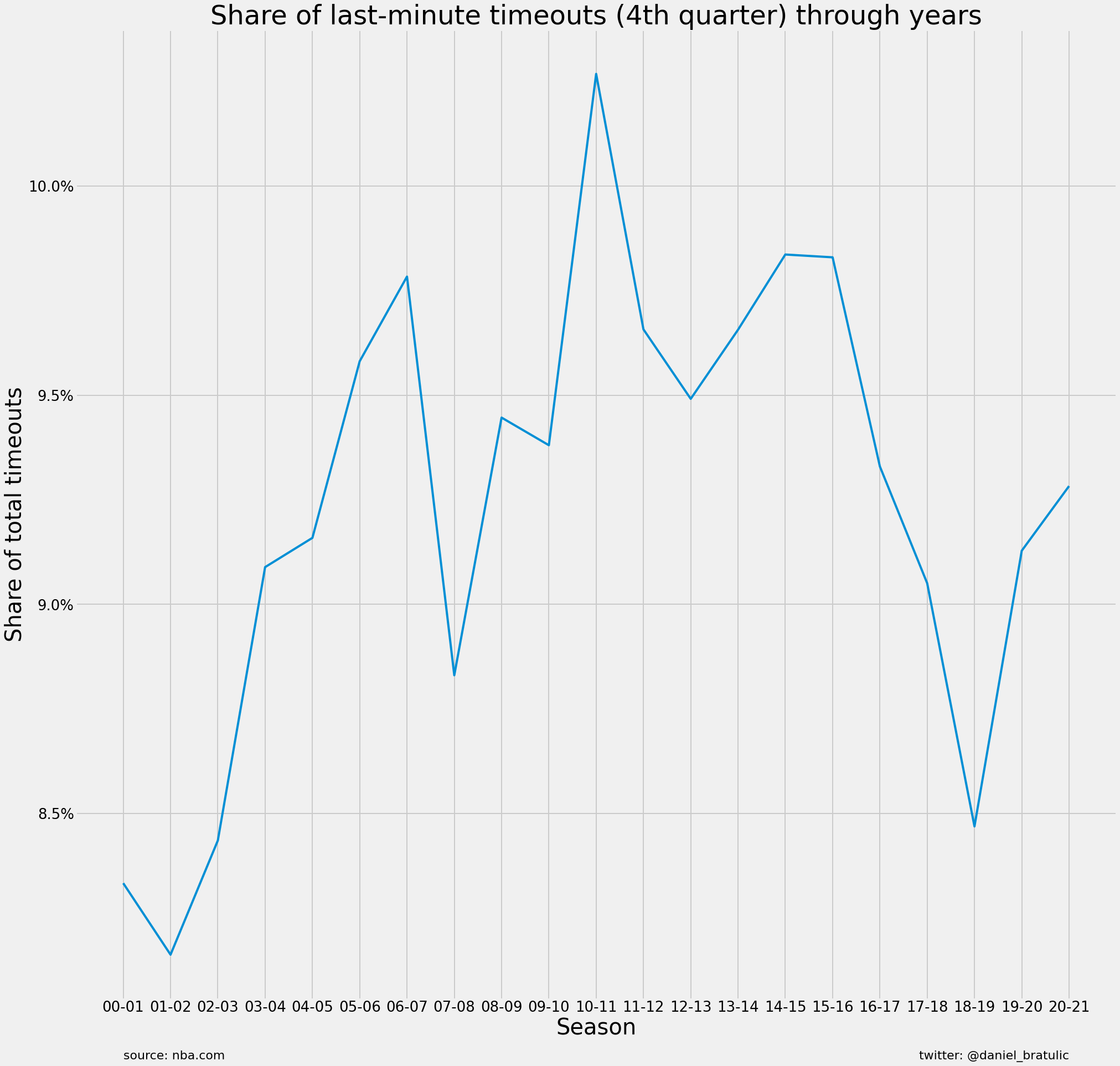 Because if you look at the previous chart, which shows the share of timeouts in the last minute of the 4th quarter over the years, you will see that that share is even dropping a bit, but still way too high. I think from these previous two charts it’s pretty clear that timeouts are the main excitement killers during the key moments of the game.

Will this be solved in the future?

The NBA invests a lot in the “viewability” of games. Proof of this is a great conversation between Evan Wasch (Executive Vice President, Basketball Strategy & Analytics) and Ben Taylor (the person behind the phenomenal Thinking Basketball channel), I recommend everyone to listen to that conversation on Ben’s Spotify, and I believe that it also exists on other podcast platforms.

They mention there that they are investigating whether longer but less frequent breaks, or shorter but more frequent breaks are better. They also discussed the replay system and touched on extreme experiments with free throws in the G-League where players shoot only one throw instead of 2/3 as in all other basketball competitions. But free throws are not the problem in my opinion, because the number of fouls, and thus the number of free throws is constantly decreasing.