Is the mid-range really dead?

There has never been a smaller number of shots from mid-range, but does that mean that the mid-range is dead? 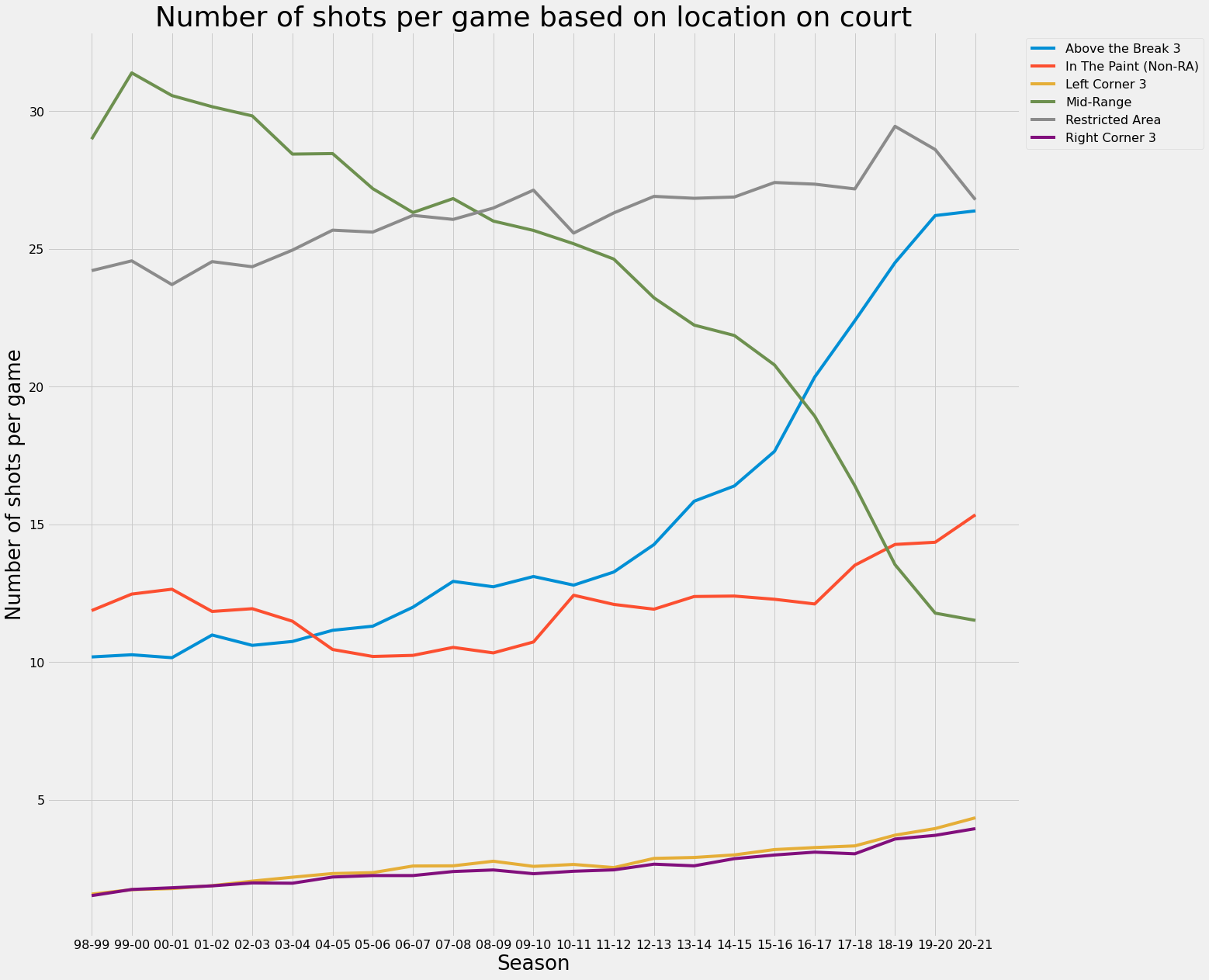 On the title chart you can see a drastic drop in shots per game from the mid-range area. On the other hand, you can see a drastic increase in 3-point shots from the Above The Break area. Other areas do not have such a drastic rise/fall, although there are some small differences in the number of shots in the Restricted Area and the paint itself.

In today’s NBA, basketball is played that way, with very few mid-range shots, in fact some teams have almost completely eradicated it from their system.

The Utah Jazz, currently the best team in the entire league play analytically perfect, taking just 6 shots per game from the mid-range, the rest coming from paint or behind 3-point line, and thus leading the league in the number of shots from corners for 3 points. Purely for reference how small that number is, Bradley Beal alone takes over 6 shots from mid-range per game.

But that’s not true only for Utah, all the teams have reduced the number of shots from that area to some extent. In the following graph, you can see the 100 most common shooting locations across the league. 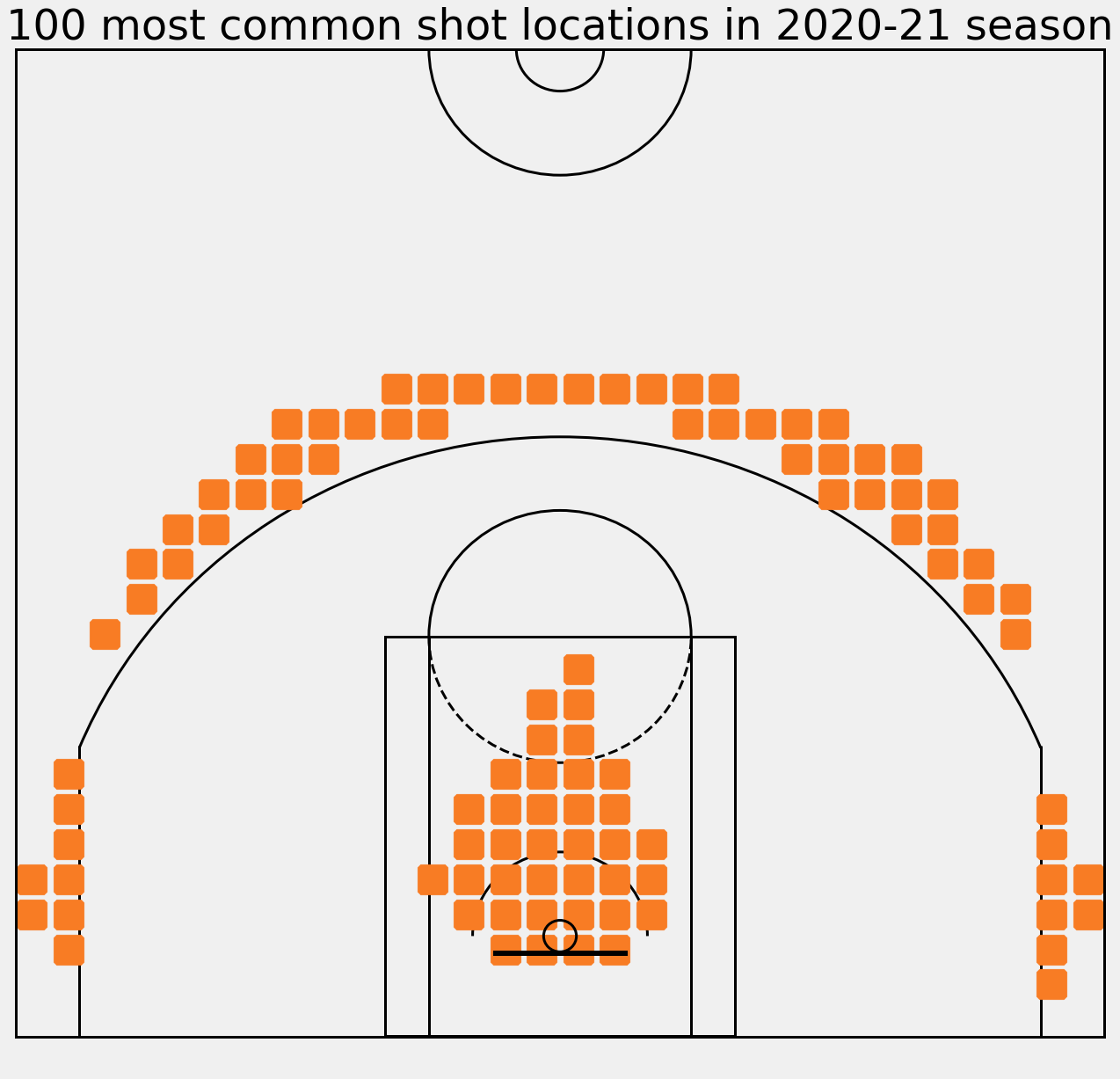 And in the following chart you can see the 100 most common shooting locations for each individual team. 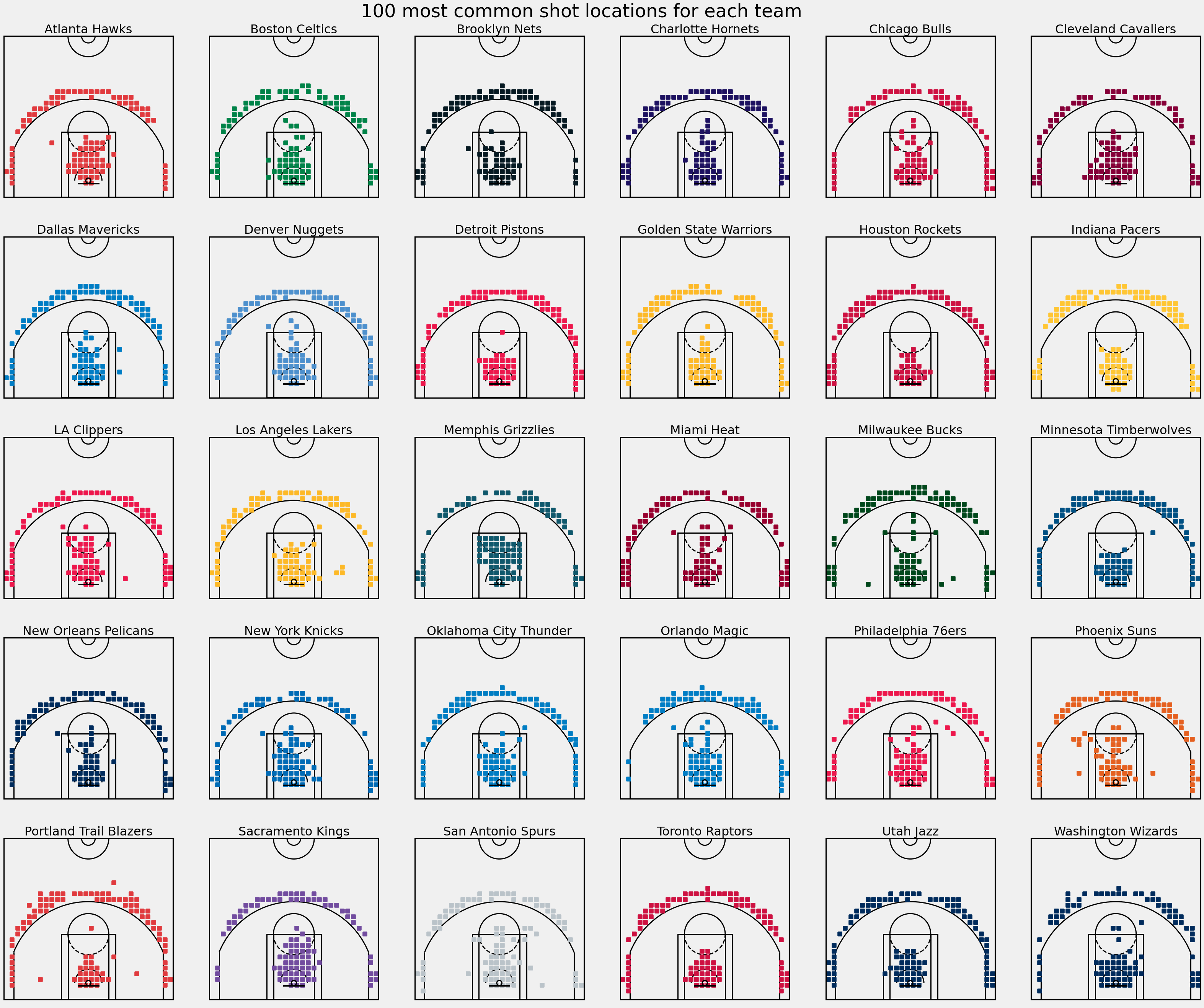 The Spurs jump out the most as the team different from the “template”, although they also have a lot less mid-range shots than last season. But this graph is very interesting and you can see some favorite locations of individual players.

This previous “mini-list” is interesting because it brings us to the next topic and the reason why the mid-range will never disappear.

The stars rely on the mid-range bigtime

The stars of the teams and pretty much entire league, ie. the playmakers and creators, rely on mid-range as a very important and dangerous weapon for the opposing team. We can read this from the following chart. 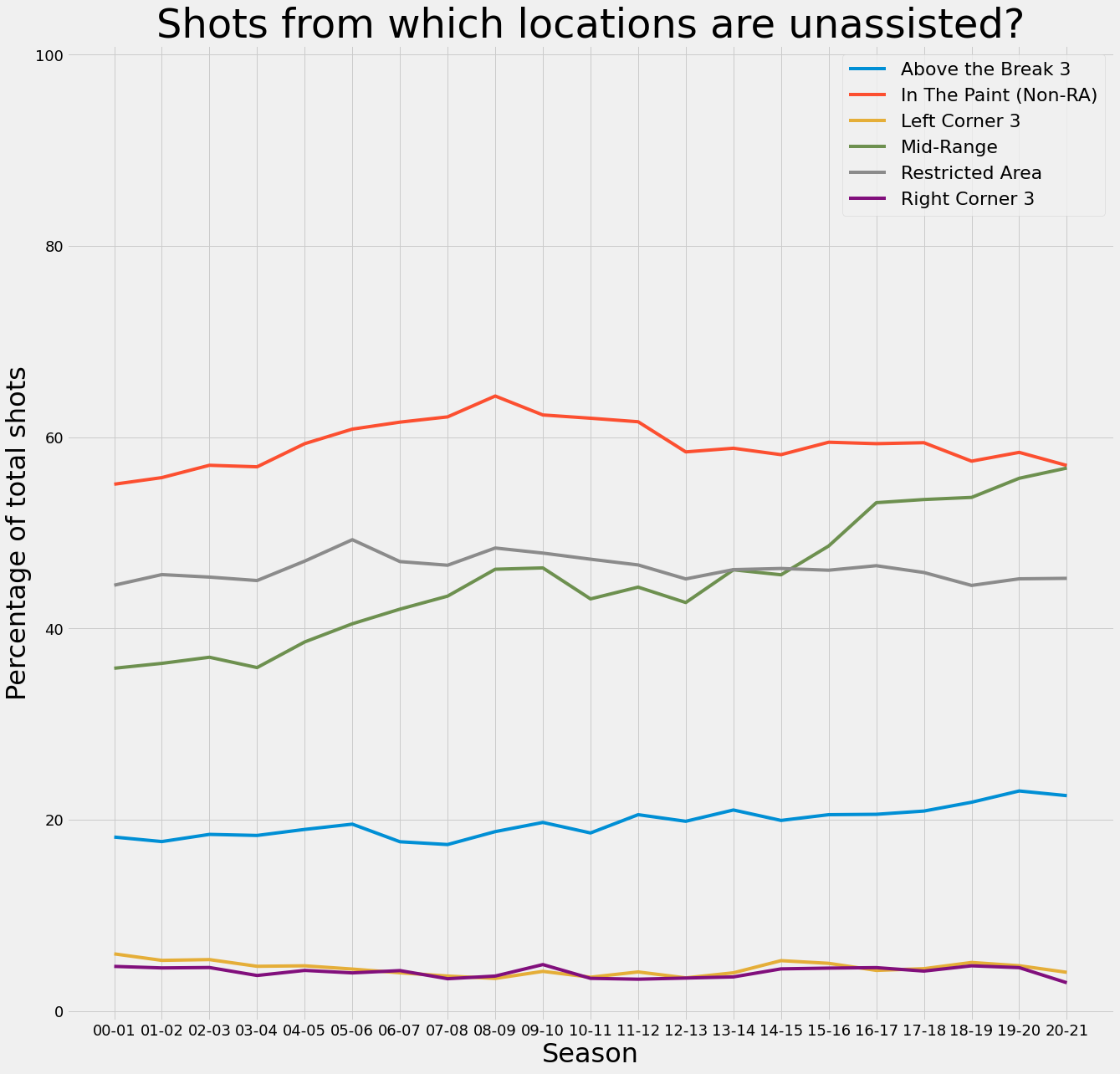 The total share of unassisted shots has been growing steadily over the past 20 years, as well as this season. This is just a confirmation of what we saw in the graph showing the most common locations for all 30 teams, where we saw signature shots for players like Kawhi, Chris Paul, etc… Due to their ability to create, they will often have opportunities to take shots from mid-range.

That is, we can say that those players who stopped shooting from the mid-range are role players, one-dimensional players/shooters such as Joe Harris, Duncan Robinson, but also Myles Turner, Brook Lopez… We can summarize this whole “drop” of the mid-range because of this type of players.

And the reason that they stopped shooting mid-rangers is efficiency. 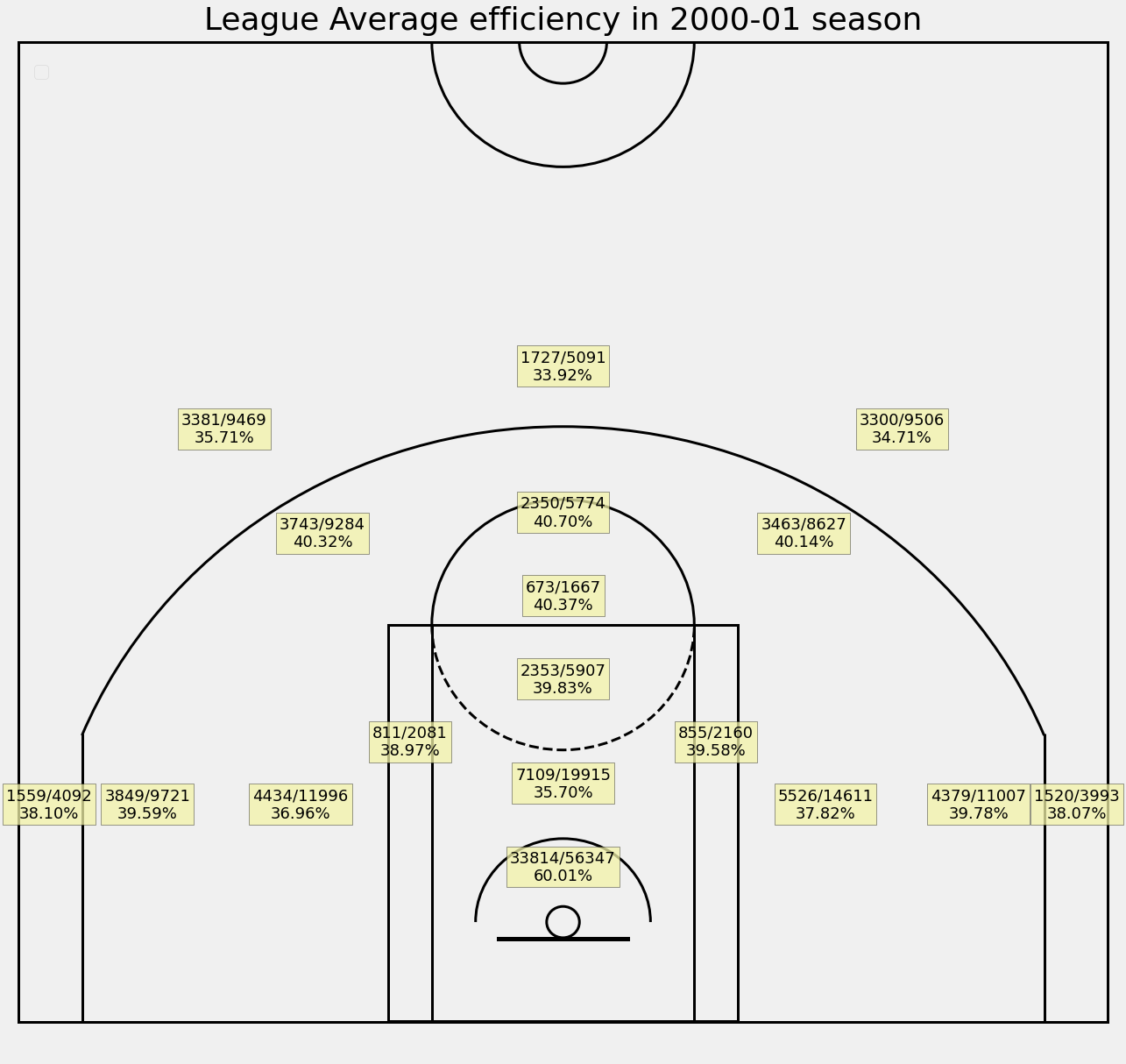 In the chart above you can see the number of shots and the efficiency of the shots in the 2000-01 season. As many as ~20,000 shots were taken from long mid-range along the baseline, but their efficiency at the level of the entire league was only 40% (we can round to a higher number), while the efficiency in threes from corners is about 38%.

But the expected points are very different.

That’s why players like Harris, Robinson and especially Turner and Lopez have moved into the corner instead of standing at half distance, because that way they have roughly the same probability of scoring, but of course they will get 3 points instead of 2.

There are more reasons that culminated to this scenario, more specifically rule changes. In the 90s there was no rule for defensive 3 seconds, which allowed players to stand in the paint much more, nowadays that’s not allowed. But whenever you look at old basketball games (80s-90s) you can see bunch of players bunched up around the paint area.

The most efficient basketball ever

The shares of shots today is much different, as I have already shown in the first graph, and thus the efficiency of shots. 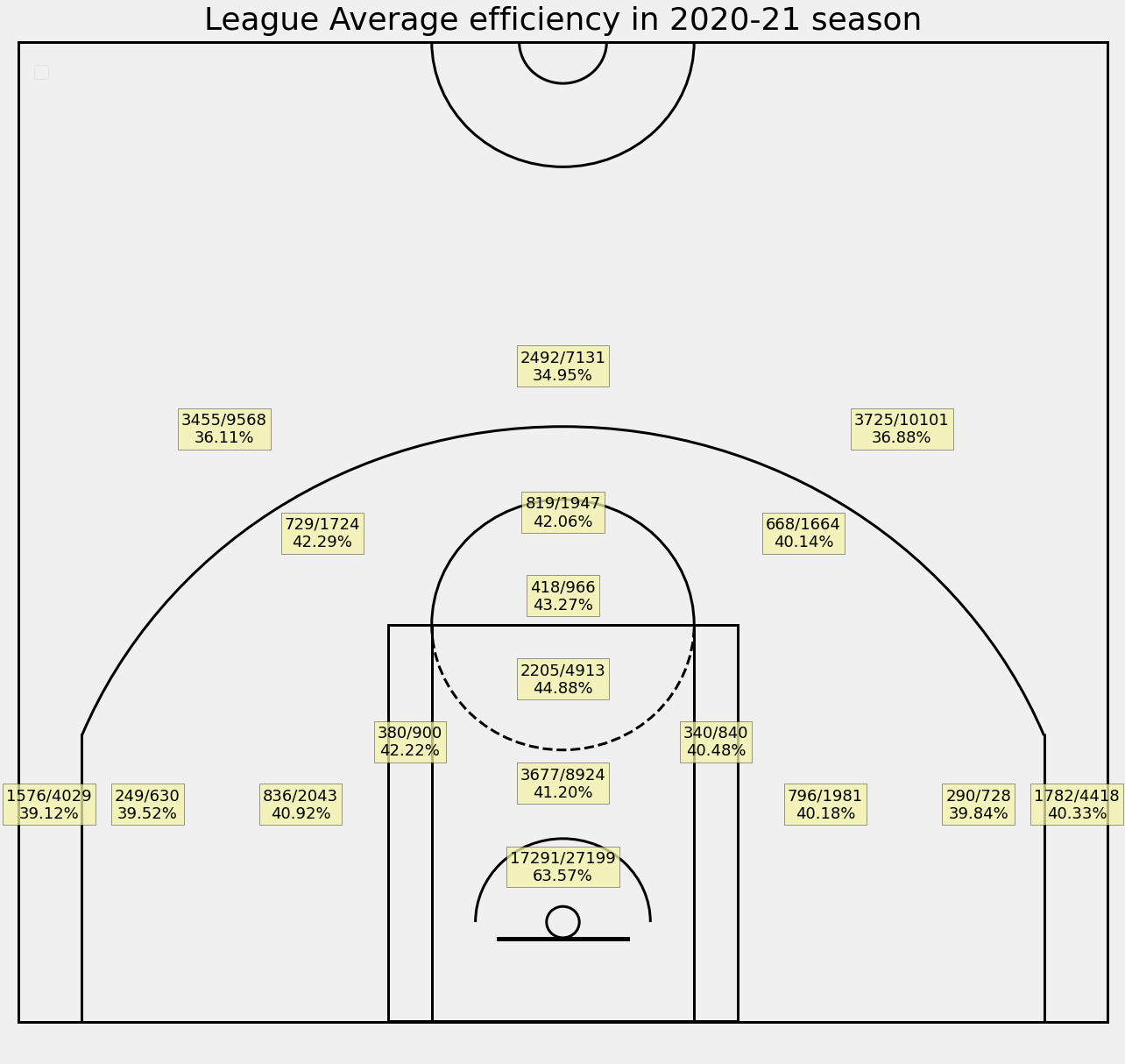 The efficiency of 3 point shot across the board has increased a bit, which makes sense as players practiced it more. Which means that the efficiency of the shot (especially corner threes) has increased to approximately 40%, and now it is just as efficient a shot as the one from mid-range on the baseline (of course, it yields a lot more points per shot as mentioned before if we calculate expected points).

The total number of these long baseline mid-range shots this season makes up only 1% of all shots, while in the 2000-01 season that made up 10% of all shots…

All of these things have led us to watch the most efficient basketball ever. 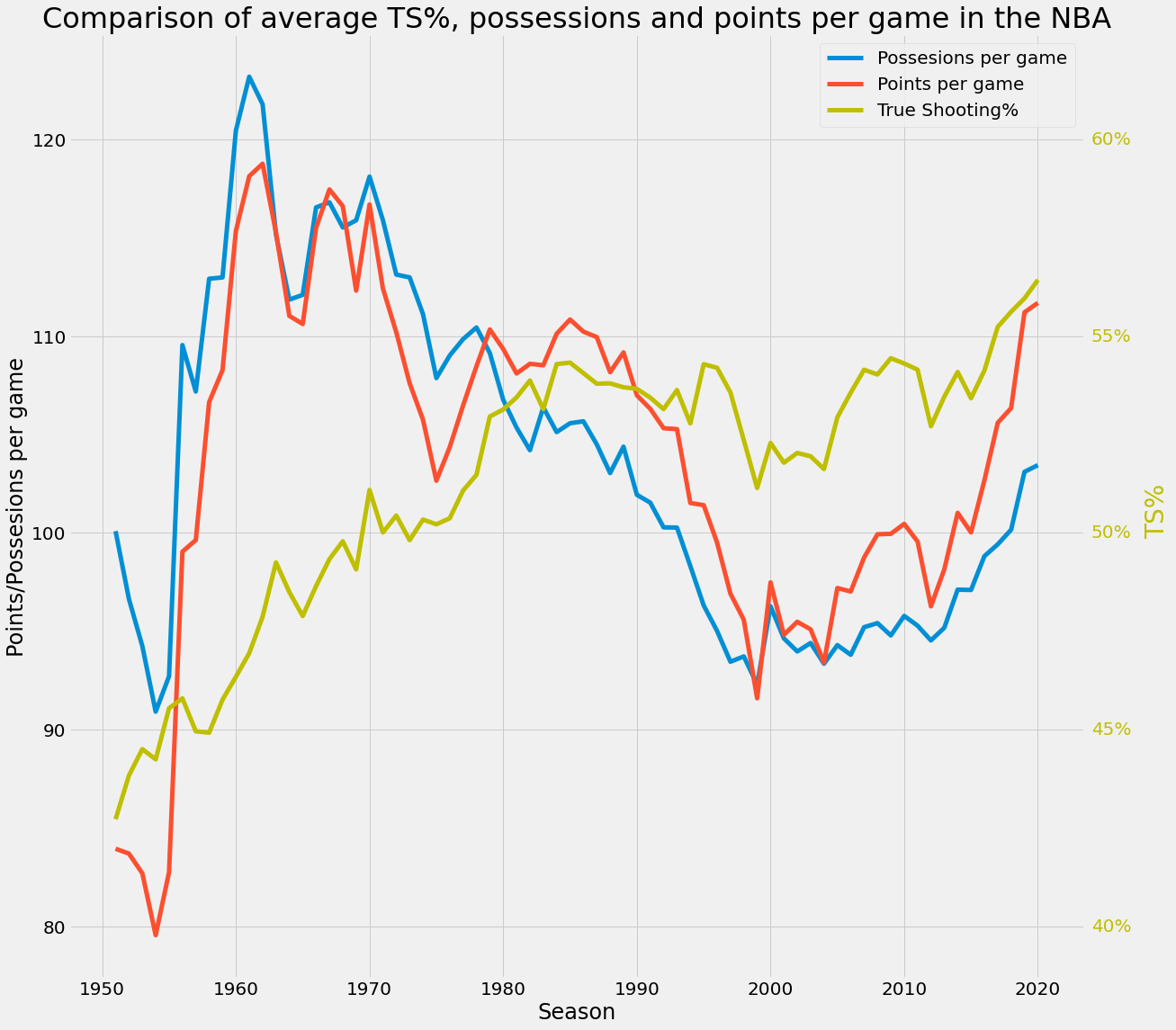 On the previous chart, you can see a comparison of the average number of possessions per game (usually called “Pace”), points per game, and “True Shooting” percentage across the league level.

True Shooting takes into account both threes and free throws and is perhaps a better approximation of efficiency than a normal percentage of shots. It is calculated as follows:

However, the caveat of that metric is that 0.44 multiplier which estimates number of free throw shots per possession might have been different in the past.

The pace was fastest in the 60’s and the time of Wilt Chamberlain and then kept falling until 2010s. when it started to grow slowly and came to the same situation as in the early 90s, but what is impressive is that TS% is the highest ever, and that teams score the same points as in the early 80s when the number of possessions was still much bigger than today.

The efficiency (or TS%) is so big due to the fact that role players shoot these cost-effective shots from corners for 3 points, or under the hoop, while avoiding long shots for 2 points.

The mid-range shot did not die, rather basketball evolved and found a place (and a very important place) for that shot. The question is how long the role players will avoid taking shots from that distance, and whether some changes in the rules will change the way today’s basketball is played, as it has been in the past…