Celtics have Found their Duo of the Future 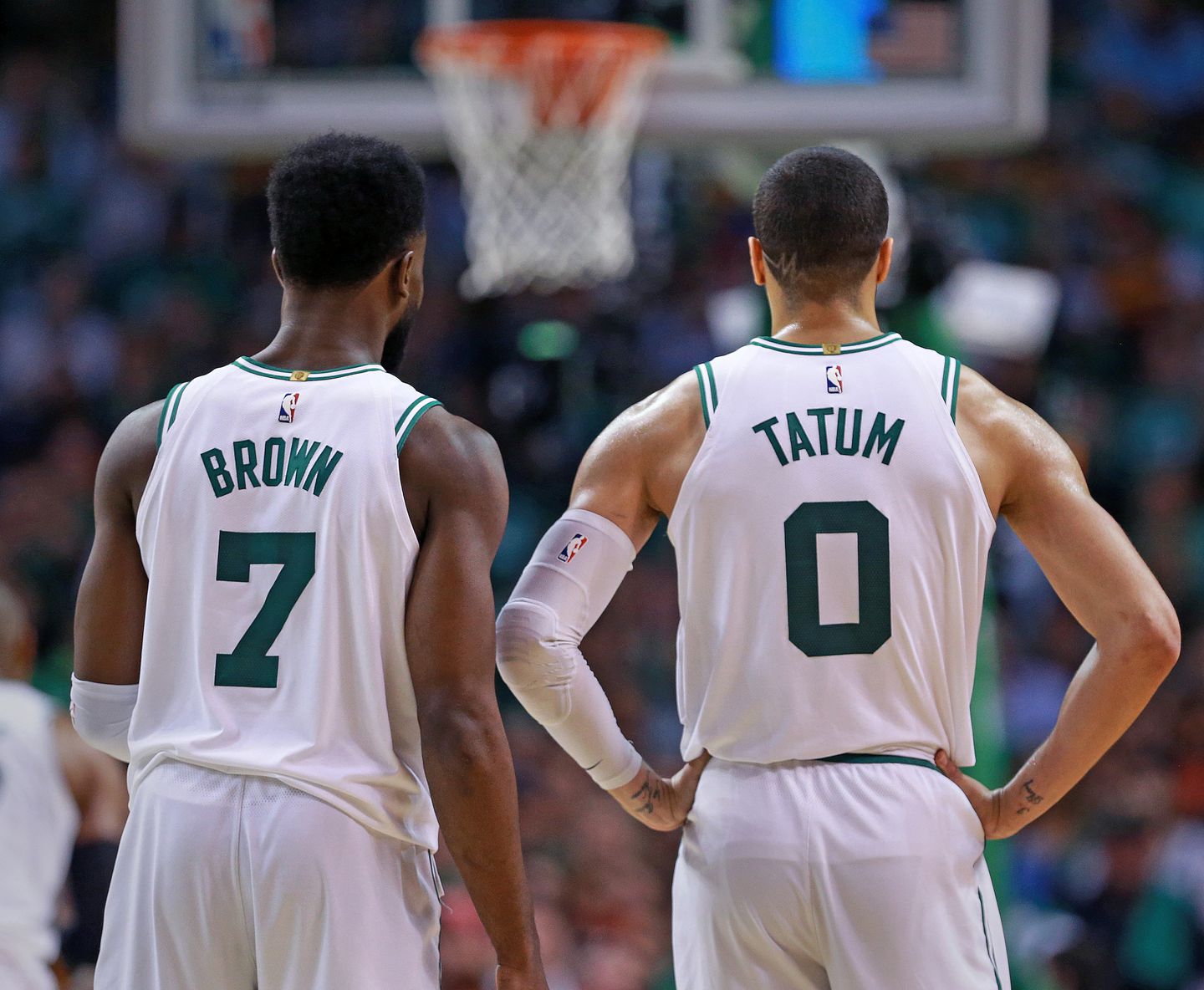 Jayson Tatum and Jaylen Brown have both had their breakout seasons this year. Their usage has been increasing each year, and this year they are the leaders of the Celtics’ team in that aspect, along with veterans Hayward and Walker. However, unlike the latter two, Tatum and Brown are only 21 and 23 years old, respectively. Given that forwards are the center pieces in most NBA teams, it seems like Celtics have a solid foundation for the future.

Tatum has emerged big time this season, earning first All-Star appearance with his great performances, and he kept it going even after the All-Star break. He capped off amazing February finishing with 30.7 points per game, while averaging 49.4/48.1/76.9 shooting splits. That was enough to earn him his first Player of the Month award.

Brown wasn’t far behind him, he averaged 21.8 points per game, with a bit worse percentages. But both of them picked it up big time with Kemba missing some time.

With all this in mind, how do they fit along with one another?

Tatum has ramped up the number of three-pointers this season, he almost doubled the attempts per game (3.9 to 7.1), while even improving 3pt% by a little. 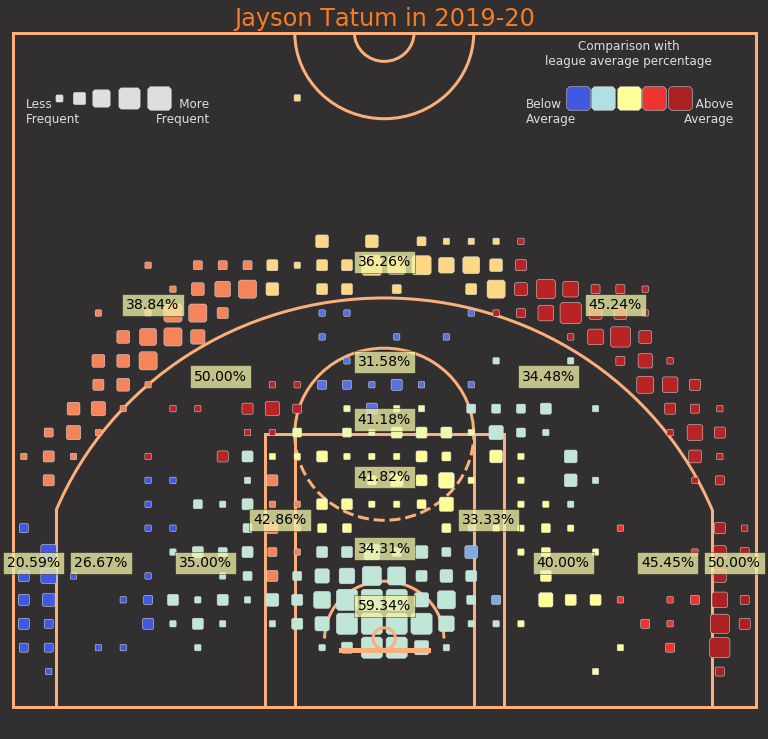 Thing that is interesting with Jayson is that he creates 55% of his three point makes by himself (that isn’t really visible on the shot chart, but it is useful info).

Brown on the other hand, is more focused on the paint and restricted area. However he isn’t too shabby when it comes to three-pointers. Most of his triples come from corners, that’s because he often defaults to spot up role in offense (more on that later). Brown excels in that role shooting almost 50% from both corners. But Jaylen is extremely efficient when shooting 2 pointers, that percentage stands at 55.2%.

Look at Scoring Based on Play Types

To compare their performance based on play types, I created a Radar Chart. Or Spider Chart, whatever name you like more. Anyway on this chart you can nicely see the profile of both of these players. 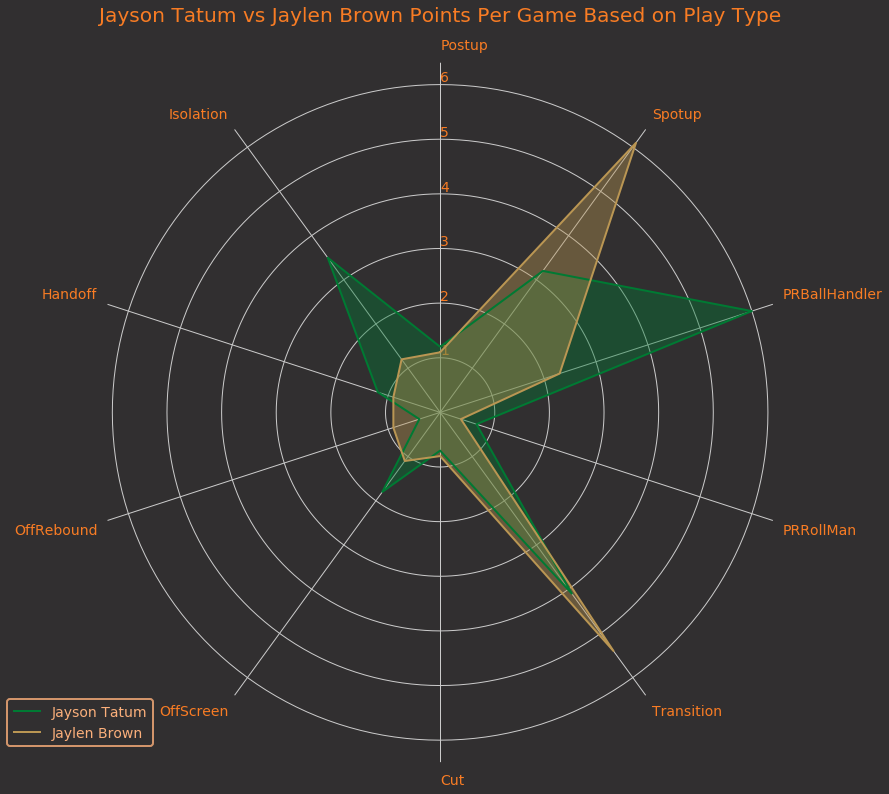 Tatum fits in the role of “The Guy” for the Celtics. Most of his points come from Isolation and Pick and Roll (where he is in the role of Ball handler). Tatum also leads the whole team in isolation points, however, the focus in Celtics isn’t on isolation. The focus for the is Pick and Roll action, which is a basic type of play installed in their motion offense. The team leader in that segment is of course Kemba, but the fact that Tatum is averaging 6 points per game tells that he is very capable of running the pick and roll.

Jaylen Brown scores most of his points while spotting up. That number is a bit bigger than expected, but the fact that 88% of his three point makes is assisted explains it. And when needed, Brown can get near the hoop by either posting up, or driving to the hoop.

Look at Scoring based on Tracking data

Once again we have another Spider/Radar chart.

So this chart is based on “Tracking” data, as it says on stats.nba.com. It’s pretty similar to previous chart and previous data but it gives a bit of a different look.

However, it is weird that Brown doesn’t have 6 points per game in “Catch and Shoot” segment, because that is the amount of point he averages in “Spot Up” plays. So I guess that either tracking data has some errors (because this is automatically generated as far as I know) or the data based on plays has some issues. Or maybe some of the “Spot Up” points went to “Pull Up Points”.

What we CAN see here is that Tatum pretty much evenly distributes the points that he created on Drives and Pull ups. And Brown tends to attack the rim more. So basically, we just confirmed the things already mentioned.

If I were a Celtics’ fan, I would be very happy with the situation of the team. Talented, young(er) coach who has a really beautiful offensive philosophy. Two very solid veteran players who can guide the team when needed. Great supporting cast which fits really well in today’s basketball; Smart is an amazing defender and started to shoot the ball well. A smart center in Theis who is doing a lot of statistically unseen things in the offense, while being a solid defender. Also, his shot is steadily improving.

And then the youth core of the Celtics, Tatum, and Brown. The team will stay the same for 2 more seasons, after which Hayward becomes FA. However, with Brown already committed to long term contract, and Tatum without a doubt being maxed, Celtics probably won’t have a problem creating a team around the two of them.